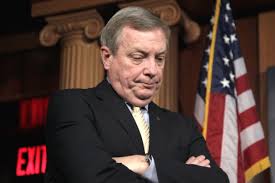 View Release as PDF
Illinois Senator Richard “Dick” Durbin is not only a habitual liar, but most of the time he gets away with it, according to wizbangblog.com, the media network focusing on news, politics, and entertainment.
In its February 11, 2014 article, “Senator Dick Durbin Lies With Impunity,” Warner Todd Huston wrote, “Senator Dick Durbin is at it again, lying through his teeth….”
First Durbin told Bob Schieffer on Meet the Press, “Ten million Americans have health insurance today who would not have had it without the Affordable Care Act – 10 million”
The Fact Checker of the Washington Post noted that Durbin appeared to be combining two figures released by the administration, and neither number was true.
Turning to the subject of the deficit, Durbin stated that Obamacare was “going to reduce the deficit more than we thought it would.”
Of course, the recent CBO report did not say Obamacare would lower the deficit. Huston noted that “On the contrary, the report said that the deficit will rise uncontrollably after 2015,” said Huston.
The Post commented that “…the number pushed by the White House, that 6.3 million have gotten new insurance under Obamacare, is impossible to substantiate because there is no way to know if those that tried to sign up actually got an insurance policy and began paying premiums. The White House is making claims that it simply cannot prove and Durbin parroted these empty claims.”
Huston added that back in October, Durbin claimed that one Republican told Obama that he “can’t even stand to look at” him in a meeting. This claim of the racist attack delivered to Obama in a face-to-face meeting turned out to be a lie.
This is, Huston concluded, the same scumbag senator who compared our soldiers to Nazis. (See Democrat senator: U.S. troops ‘Nazis’.)