Taxpayers United of America’s president, Jim Tobin, was quoted during the latest pension release detailing the pension payouts as of Feb. 1, 2015, of 1,029 public employees in Fulton and McDonough counties by Canton Daily Ledger 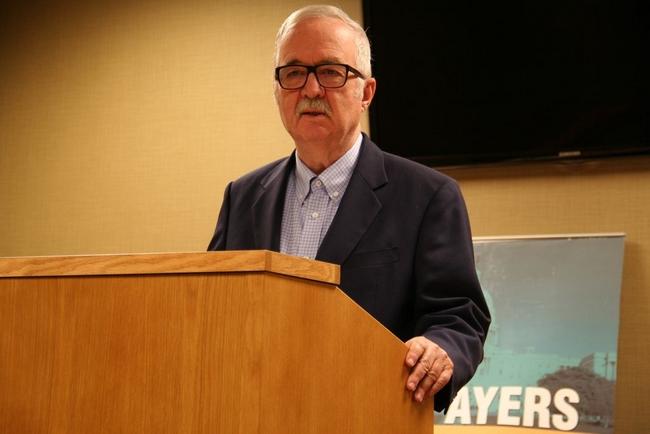 Jim Tobin, president of taxpayer watchdog group Taxpayers United of America, speaks at Canton Harvester Inn on Tuesday. Tobin was in Canton to present the findings of a report looking at pensions paid to public-sector employees in Fulton and McDonough counties.

CANTON
The president of a taxpayer watchdog group was in Canton Tuesday morning to present the latest figures on public employee pensions.
Jim Tobin, who heads Taxpayers United of America, presented part of a report detailing the pension payouts as of Feb. 1, 2015, of 1,029 public employees in Fulton and McDonough counties.
The report included data for retirees of Fulton County government, the City of Canton, Canton Police Department, Canton Fire Department, Canton Union School District 66 and Spoon River College.
Taxpayers United of America was founded in 1976 as National Taxpayers United of Illinois.
Over the years, the group expanded to include other states and morphed into Taxpayers United of America. Tobin and his colleagues travel the country speaking about public pension and property tax reform.
They publish annual reports on public-sector pensions and assist those fighting against tax increases.
Annual pensions listed in the materials provided to the media range from $20,837 to $109,632 within Fulton County, the report shows.
“Seventy-five percent of the areas’ local government retirees are getting annual pension payments of more than $50,000,” Tobin said. “The average annual pension for these government retirees is about $63,672, and their average personal investment in their own gold-plated pension is a mere 5.5 percent.”
Some of the figures presented by the group could not be independently verified by the Ledger at press time, but many of the pension payouts presented to the media were listed as part of a database operated by the Better Government Association, another group that monitors Illinois government.
Tobin went on to say that the blame for these large pensions rests squarely on the shoulders of Illinois Democrats, and specifically called out House Speaker Michael Madigan and Senate President Tom Cullerton.
“You need to throw Madigan and his friends out of office” in order to affect pension reform, he said. “Senate Democrats need to go. … All of those guys have failed the taxpayers. They and their friends and family slop at the public trough.
“The Republicans are going to have to shape up or there won’t be any of them left.”
Tobin also said a sweeping reform of pensions in Illinois must happen and that public-sector pensions should be structured more like the retirement plans offered through private companies.
“Let them (employees) raise the money themselves (and) stop making the taxpayers raise the money,” he said. “It’s absurd. It’s ridiculous. It’s the worst system in the entire country.”
By temp-admin on January 14, 2016   /   Illinois Press, Latest, Pension Reform, Press