View as PDF
CHICAGO —All across the country, millions of government pensioners are contract-bound to receive lifetime pension payouts, each in the millions of dollars, along with taxpayer- funded, premium healthcare insurance, according to Rae Ann McNeilly, executive director of Taxpayers United of America (TUA).
“There has been a flurry of reaction to the ‘discovery’ of Alameda County Administrator, Susan Muranishi, securing an excessive lifetime annual payment of $423,000. We have completed analysis of government employee salaries and pensions in nineteen states across the country and while Ms. Muranishi’s pay is on the high end of the scale, it just isn’t as uncommon as you might think.”
Peter G. Mehas, retired from the Fresno County Office of Education, annual pension – $241,807; est. lifetime payout: $9,357,534
Tapas Das Gupta, retired from the University of Illinois, annual pension – $426,885; est. lifetime payout: $8,337,549
Frank A. Fairbanks, retired city manager of Phoenix, AZ, annual pension – $246,813; est. lifetime payout: $7,404,386
Irene Mitchel, retired from the Pennsylvania Higher Ed System, annual pension – $332, 017; est. lifetime payout: $9,960,523
“Alameda County, CA (ACERA) had fourteen pensioners receiving eight-figure pensions in 2011, the highest being $17,824,590 estimated lifetime payout to Gary Thuman, based on his annual pension of $396,102. This is what he is being paid not to work.”
“Alameda County government teachers have a real sweetheart deal too. Christine A. Lim, retired from San Leandro Unified and enjoys $239,092 in annual pension payments. Her est. lifetime payout is a stunning $10,436,359. Not bad for ‘civil servant’. The top 100 Alameda County government teacher pensions average $5.5 million.”
“How did pensions ever get so outrageous?” asks McNeilly. “These grotesque pension payments have far exceeded any possible original intent of adequately compensating ‘civil servants’ for meager wages that lean government budgets could barely afford for basic services. No, the pension scam has become the number one tool of corruption for top government union bosses to stay in power and to reelect those that would make such deals with the devil. And to ensure the scam proliferates, lavish pensions have been awarded to the legislators who would vote on this issue. This keeps them protected by the state’s laws, and for judicial certainty, the very judges who might rule on any challenges to the system have themselves been made part of the conspiracy with gold-plated retirement security of their own.”
“Knowing all that we know about the desperate state of government pensions across the country, how then do some states continue to hide their pension largesse behind a shroud of legal secrecy? One might think pensioned judges wouldn’t protect their own pension payments from public review. But consider Colorado, where Denver District Judge Edward D. Bronfin ruled that the state’s own treasurer, Robert Stapleton, could not have ‘unlimited, unfettered access’ to the state’s PERA data, holding that individual names and pension amount are personal. When you consider that Colorado’s PERA has at least a $16.8 billion unfunded liability, it would seem the public will be picking up a majority of that tab and it should be open for review.”
“Colorado is not the only state that still hides pension payments from public review. To give taxpayers an idea of what the current government pension laws allow for, TUA estimated pensions for current employees, assuming they meet the terms of full retirement. The shear magnitude of these estimates explains why government bureaucrats maintain the shroud of secrecy. Consider current Colorado State employee, Robert K. Hammond, a Colorado State employee whose salary is $225,000. Under current PERA rules, assuming he meets all of the criteria, he would be eligible for an annual pension of about $168,750 that could accumulate to a lifetime payout of about $5.4 million.”
“Nevada is another state that keeps individual pension payouts from public review. The state keeps its approximately $11 billion in unfunded liabilities hidden as well. Ricardo A. Bonvincin, a corrections lieutenant, was receiving $435,658 in annual wages. Assuming he met all criteria for full retirement, he would have been eligible for an annual pension of $335,456, potentially accumulating to a stunning $15,961,017.”
“And so the list goes across the country.”
“Cities, counties, government boards are buckling under the shear magnitude of these pension promises — promises negotiated out of corruption and expanded to include all who would challenge them, such as legislators and judges. The current government-employee pension system is indefensible on any level. If contractual agreements are honored across the country, taxpayers will be required to sacrifice all their property to ensure that the ‘new elite’ keep pulling in the big bucks.”
“It is actually too late for pension reform, and time for pension settlement for existing pensioners and pension replacement for new hires. It is mathematically impossible to tax our way out of the government pension debacle, so what is left? Stockton, CA, is taking the bankruptcy path to dealing with its fiscal irresponsibility, which will allow it to reorganize its debt. Does every city, county and state government have to go bankrupt in order to fairly settle the incredible financial burden placed squarely on the backs of taxpayers as a direct result of this ubiquitous corruption?”
“But the debt is only half of the problem. Any city, county, state, or court that manages to survive the overwhelming pension crisis and allows the system to perpetuate under the same set of rules is acting criminally. It is time to end government pensions forever.”
Note: All pension amounts are based on 2011 reports generated on data received directly from each of the respective funds and the pension laws in force at the time of each study.

Of particular note was the story from KGUN-TV 9. To see video of the story, click on the image below: 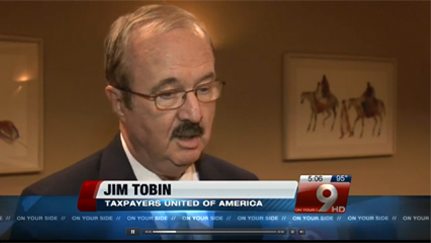 Additional press coverage from the Goldwater Institute and AZ-TV7 is expected in the future.

Arizona is the 16th state on TUA’s 50-state-tour focused on the number one budgetary problem in the US: government pension funding. TUA will be revealing more states’ pension amounts across the nation, including those of Colorado later this month.
We appreciate your support. It is your generosity that makes all of this possible.

View release as a PDF
TUCSON—Taxpayers United of America (TUA) today released the results of a new pension study of Tucson government retirees.
“Arizona lawmakers have made modest attempts to undo the damage of administrations past, that have made budget-crushing deals with union bosses whose only concern is their own job security,” stated Jim Tobin, President of TUA.
“But despite efforts to reform the pension system, the very judiciary that will benefit from the lavish payouts ruled that the reforms written into law were unconstitutional, while the weight of the system’s unfunded liabilities crush the taxpayers. Government pensions are the number one budgetary problem in the country and Arizona is no different.”
“While residents across Arizona face crushing taxes, falling home values, high unemployment, and a painfully slow economic recovery, government employees continue to receive stunning pensions largely funded by taxpayers who will never collect more than about $22,000 a year from Social Security.”
“The purpose of our study is to put some perspective around individual pensions, to put them in terms to which the average taxpayer can relate. Taxpayers need to know how much Arizona’s government retirees are being paid not to work and the astronomical accumulation of those payments over an average lifetime. The 100 top government retirees being released today will collect over $232 million to do absolutely nothing!”
Tobin continued, “For example, Richard Putz, a retired Tucson employee, collects an annual pension of $113,979. His estimated lifetime pension payout could be a staggering $3,419,377.*”
“Bruce O. Parks, retired Pima County employee, has an annual pension of $125,292*, with an estimated lifetime payout of $3,758,756.* ”
“James Keene, retired Tucson employee, has a lifetime estimated pension payout of $3,141,209* with an annual pension of $104,707*.”
View pension amounts below:

“Arizona’s government pension systems are crushing middle class Arizonans. Replacing defined benefit pensions for all new government hires with social security and 401(k)s would eventually eliminate unfunded government pensions. Current government employees must consider a voluntary pension contribution of up to 10% to preserve their pension benefits. Additionally, all members should pay for 50% of their healthcare premiums. We need a stable system that is fair to both taxpayers and beneficiaries or pension checks will stop coming,” added Tobin.
*TUA submits FOIA requests for pension recipients’ actual annual pensions, then estimates lifetime payouts based on IRS Form 590 LE of 85 and retirement at age 55.