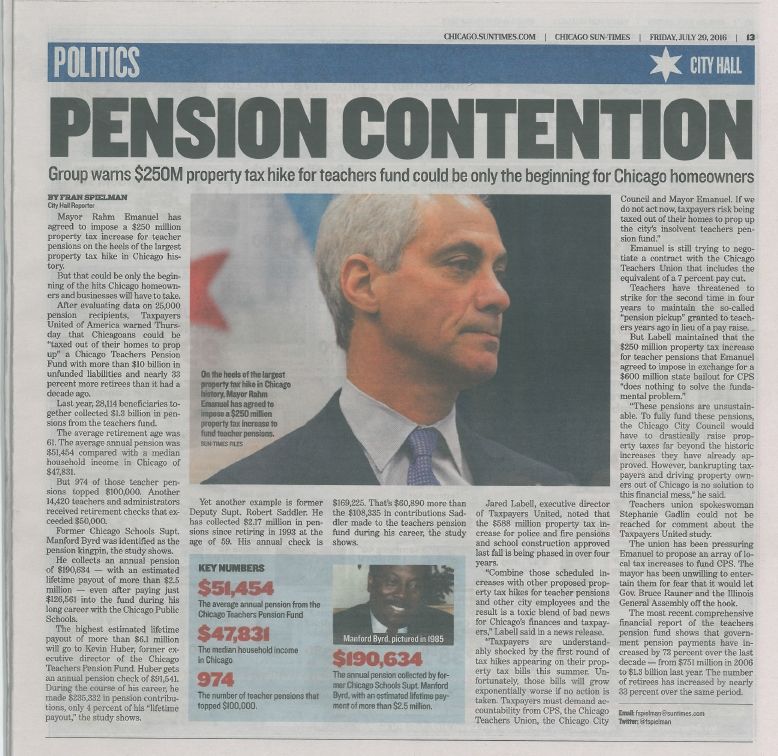 Mayor Rahm Emanuel has agreed to impose a $250 million property tax increase for teacher pensions on the heels of the largest property tax hike in Chicago history.

But that could be only the beginning of the hits Chicago homeowners and businesses will have to take.

After evaluating data on 25,000 pension recipients, Taxpayers United of America warned Thursday that Chicagoans could be “taxed out of their homes to prop up” a Chicago Teachers Pension Fund with more than $10 billion in unfunded liabilities and nearly 33 percent more retirees than it had a decade ago.

Last year, 28,114 beneficiaries together collected $1.3 billion in pensions from the teachers fund.

The average retirement age was 61. The average annual pension was $51,454 compared with a median household income in Chicago of $47,831.

He collects an annual pension of $190,634 — with an estimated lifetime payout of more than $2.5 million — even after paying just $126,561 into the fund during his long career with the Chicago Public Schools.

The highest estimated lifetime payout of more than $6.1 million will go to Kevin Huber, former executive director of the Chicago Teachers Pension Fund. Huber gets an annual pension check of $91,541. During the course of his career, he made $235,332 in pension contributions, only 4 percent of his “lifetime payout,” the study shows.

Yet another example is former Deputy Supt. Robert Saddler. He has collected $2.17 million in pensions since retiring in 1993 at the age of 59. His annual check is $169,225. That’s $60,890 more than the $108,335 in contributions Saddler made to the teachers pension fund during his career, the study shows.

Jared Labell, executive director of Taxpayers United, noted that the $588 million property tax increase for police and fire pensions and school construction approved last fall is being phased in over four years.

“Combine those scheduled increases with other proposed property tax hikes for teacher pensions and other city employees and the result is a toxic blend of bad news for Chicago’s finances and taxpayers,” Labell said in a news release.

“Taxpayers are understandably shocked by the first round of tax hikes appearing on their property tax bills this summer. Unfortunately, those bills will grow exponentially worse if no action is taken. Taxpayers must demand accountability from CPS, the Chicago Teachers Union, the Chicago City Council and Mayor Emanuel. If we do not act now, taxpayers risk being taxed out of their homes to prop up the city’s insolvent teachers pension fund.”

Emanuel is still trying to negotiate a contract with the Chicago Teachers Union that includes the equivalent of a 7 percent pay cut.

Teachers have threatened to strike for the second time in four years to maintain the so-called “pension pickup” granted to teachers years ago in lieu of a pay raise.

But Labell maintained that the $250 million property tax increase for teacher pensions that Emanuel agreed to impose in exchange for a $600 million state bailout for CPS “does nothing to solve the fundamental problem.”

“These pensions are unsustainable. To fully fund these pensions, the Chicago City Council would have to drastically raise property taxes far beyond the historic increases they have already approved. However, bankrupting taxpayers and driving property owners out of Chicago is no solution to this financial mess,” he said.

Teachers union spokeswoman Stephanie Gadlin could not be reached for comment about the Taxpayers United study.

The union has been pressuring Emanuel to propose an array of local tax increases to fund CPS. The mayor has been unwilling to entertain them for fear that it would let Gov. Bruce Rauner and the Illinois General Assembly off the hook.