Findings from TUA’s Illinois pension project are featured in this story from the Daily Herald. The story appeared on the front page of the Herald’s print edition, viewable here. 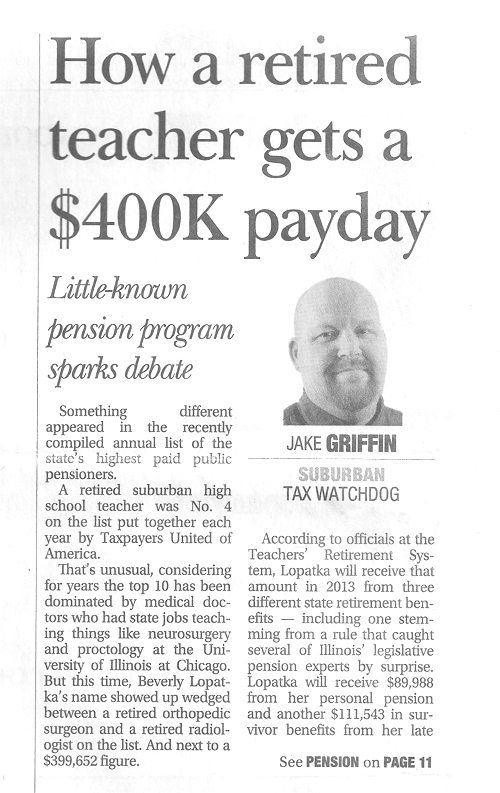 Something different appeared in the recently compiled annual list of the state’s highest paid public pensioners.
A retired suburban high school teacher was No. 4 on the list put together each year by Taxpayers United of America.
That’s unusual, considering for years the top 10 has been dominated by medical doctors who had state jobs teaching things like neurosurgery and proctology at the University of Illinois at Chicago. But this time, Beverly Lopatka’s name showed up wedged between a retired orthopedic surgeon and a retired radiologist on the list. And next to a $399,652 figure.
According to officials at the Teachers’ Retirement System, Lopatka will receive that amount in 2013 from three different state retirement benefits — including one stemming from a rule that caught several of Illinois’ legislative pension experts by surprise. Lopatka will receive $89,988 from her personal pension and another $111,543 in survivor benefits from her late husband Robert, who was a school district superintendent. She’ll also receive $198,121 from a completely legal, but little known, provision called a “reversionary benefit.”
Attempts to reach Beverly Lopatka, who now lives in another state, were unsuccessful. However, there were others who had plenty to say about the controversial benefit program.
“It sounds preposterous,” said state Rep. Elaine Nekritz, a Northbrook Democrat. “I don’t know how you get that and a survivor’s annuity. This is the first I’ve heard about this.”
That’s from a legislator so embroiled in the state’s pension reform debate that many consider her to be the leading legislative expert on pension law in Illinois.
Reversionary pensions have a tragic prologue. They are almost always chosen by a retiring public worker with a terminal disease, TRS officials said. Lopatka’s husband, a former superintendent at Community High School District 88 in Addison, was diagnosed with cancer and died in 2003, two years after retiring, according to published reports from the time. Reversionary pensions work like this: The choice has to be made upon retirement. There are no take-backs or coming in late. A retiring worker chooses a “dependent beneficiary.” That means a spouse, a child under age 22, a child of any age suffering from a physical or mental disability, a civil union partner or a dependent parent. When the retiree dies, some beneficiaries receive not only the reversionary pension but also survivor benefits, which amount to half of the retiree’s original pension.
TRS calculates a reduction of the retiring worker’s pension to cover the cost of pension payouts lasting longer than actuaries initially projected. Retirees get that slightly reduced amount until they die, then the beneficiary begins collecting that same payout. TRS officials said the reduction makes reversionary pensions “actuarially neutral.”
However, opponents believe allowing someone to take over another person’s pension after he or she dies can’t help but affect funding of the pension system.
“It’s got to throw off the actuarial tables,” said Rae Ann McNeilly, executive director of Taxpayers United. “This just further illustrates the immorality of the whole system.”
In the Lopatka case, the husband’s pension was reduced 12.6 percent, according to TRS records. Because of cost-of-living adjustments that are compounded annually, the reversionary benefit would have gained back the amount lost due to the reduction within about four years. Combined, the Lopatkas contributed $466,078.15 to their retirement fund during their careers, according to TRS records.
McNeilly’s organization wants the legislature to move all of the state’s public pension programs into a 401k-type system. They believe that will significantly reduce the taxpayers’ burden in funding pensions.
TRS spokesman Dave Urbanek said the effect of reversionary pensions on the overall fund is “not statistically significant.”
But some disagree.
“It may be statistically insignificant, but it’s not insignificant to taxpayers,” said state Rep. Darlene Senger, a Republican from Naperville. “It’s kind of a dumb benefit to have, in my opinion. Reversionary pensions haven’t come up at all in the pension debate, but what will solve this dilemma is a pension cap.”
Senger and many other legislators believe limiting the amount someone can receive as a retirement benefit will cut taxpayer costs. However, others remain opposed to that plan and argue the proposed cap is still too high.
Reversionary pensions are rare. The benefit has been around since 1947. Officials at TRS believe the benefit was the program’s original “survivor annuity.” But when survivor benefits were made part of the plan, the reversionary component was kept for special circumstances. Urbanek said there are only 188 people receiving this type of annuity out of the system’s more than 105,000 beneficiaries. Only 62 of the 102,776 beneficiaries are receiving similar benefits through the Illinois Municipal Retirement Fund, officials there said. Among retired judges, state employees, legislators and statewide officeholders, only a “handful” receive reversionary benefits, officials at the State Retirement Systems said. Of those 188 receiving TRS reversionary benefits, a search of the fund’s records only uncovered 30 others who receive the same three payments as Lopatka. And none get even half of what Beverly Lopatka receives.
Marilyn Breiding is one of those 30. The former Rolling Meadows High School speech therapist and home economics teacher retired in 2002 after nearly 34 years, though she still volunteers at the district and in the community. Her 2013 pension payout will amount to $191,068, according to TRS records. Breiding said it was difficult for her and her late husband Philip to decide on the reversionary benefit because it meant acknowledging he was going to die.
“He had cancer and he knew he wasn’t going to live much longer, so that’s how it came about,” she said. “It helps a lot, but I’d rather have him.”