View as PDF Chicago — Recent unprecedented disclosures of government malfeasance have forced Americans to confront unpleasant truths about the nature of our government. Americans do not trust the government – and in record numbers. It is understandable, and equally troubling, then, for Americans to come to expect opaqueness from a government that commonly flouts the U.S. Constitution andthe laws intended to bind its authority. We shouldn’t be too surprised to learn that the government is still fighting a seventy-four-year battle over transparency and the historical record, dating back to World War II.
Last week, the Obama administration’s efforts to maintain opacity received another healthy dose of sunlight after a panel of the 7th U.S. Circuit Court of Appeals voted 2-1 to unseal grand jury records related to the journalism of a Chicago Tribune correspondent’s June 7, 1942 report that implied the government had broken Japan’s secret naval code.
The implications of these revelations are far-reaching, just as Taxpayer Education Foundation reported previously. In a December 2011 analysis of the extensive body of scholarship concerning FDR’s foreknowledge of the Japanese military’s naval codes and planned attack at Pearl Harbor, Taxpayer Education Foundation’s research director, Dennis Constant, wrote, “In September and October of 1940, Army and Navy cryptographers solved the principal Japanese government code, the Purple code, which was the major diplomatic code. The naval codes were a series of 29 separate operational codes. According to Stinnett, Japan used four of these codes to organize and dispatch her warships to Hawaii by radio. American cryptographers had solved each of the four by the fall of 1941, even though the Japanese were introducing minor variants every three months to foil cryptographers.”
“Taxpayers, regrettably, are forced to fund the government even when its policies are opposed to the interests of Americans and our liberty,” said Jared Labell, executive director of Taxpayers United of America (TUA). “While it is clear that the government is naturally incentivized to over-classify information and maintain strict secrecy over its vast realm of perceived interests, Americans must demand transparency and support all efforts to pull back the curtain on the machinations of the government. Disclosures not only help clarify the historical record and provide further insights into past policies, but they are tremendous opportunities to learn how tax dollars are spent by the government and in pursuit of what ends.”
“These recent legal developments further threaten the government’s ability to act in complete secrecy without risk of exposure,” said Labell. “We aren’t certain of the precise revelations contained in thesealed grand jury testimony. The documents might further corroborate longtime claims made by numerous historiansimplicating FDR and his administration in failing to protect the American military personnel based at Pearl Harbor, although the Japanese naval codes were deciphered. The code-breaking revelations the following year in the Chicago Tribune did not please the administration, to say the least.”
“The Tribune’s tacit revelation of the code-breaking coup infuriated Washington. President Franklin Roosevelt wanted to have Marines occupy Tribune Tower,” the Chicago Tribune’s Editorial Board wrote last Friday following the court’s decision to unseal the records due to high historical interest and the negligible need for secrecy in 2016. 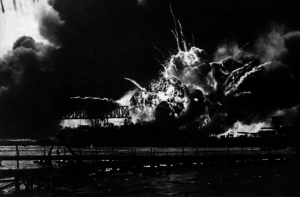 “Under pressure from Roosevelt and Navy officials, a special prosecutor impaneled a federal grand jury here to consider espionage charges against reporter Stanley Johnston, managing editor J. Loy Maloney and the Tribune itself. The grand jurors decided not to indict. But for 74 years the testimony they heard from some 13 witnesses — including naval officers and staffers from the Tribune and two other newspapers that ran its story — has remained sealed.”
Department of Justice lawyers have fought this disclosure at every turn, because even though the circumstances surrounding Johnston’s story and naval code-breaking at the Battle of Midway are invaluable to the historical record, the true court battle is concerned with the question of under what exceptional circumstances are grand jury proceedings to be made public.
President Woodrow Wilson signed the Espionage Act of 1917 into law in June of that year, only a couple months after the United States entered World War I. The case against the Chicago Tribune, its managing editor, and its reporter, Stanley Johnston, is the only known attempt to charge journalists with violating the Espionage Act, although the panel eventually declined to indict.
The government has until September 29 to appeal to the full 7th Circuit Court, or opt to appeal to the U.S. Supreme Court until mid-December 2016. Litigation director for the Reporters Committee for Freedom of the Press, Katie Townsend, summarized what’s at stake in this case that dates back nearly three quarters of a century, “The Tribune case speaks directly to a fundamental tension at the core of our democracy, involving the public’s right to know and the government’s duty to protect its citizens in time of war.”
“America, of course, isn’t a democracy, but it’s also barely a republic at this point. Chelsea Manning heroically liberated government records of the Baghdad airstrike Collateral Murder footage, Afghan and Iraq War logs, diplomatic cables, Guantanamo Bay files, and more. Edward Snowden disclosed National Security Agency documents while working as a contractor, revealing the government’s ubiquitous system of spying and surveillance of American citizens, foreign civilians and governments,” said Labell.
“Manning and Snowden merit our thanks for alerting the American public, not condemnation. Similarly, we don’t need to wait another 75 years to learn more about sealed testimony regarding a journalist, code-breaking, and our government’s actions during World War II. Taxpayers deserve to know.”
Founded in 1976, TUA is one of the largest taxpayer organizations in America.