In the land of high property taxes, one village goes for broke

West Dundee Trustees Consider Plan to Make Village the Tax Capital of the United States
View as PDF
WEST DUNDEE — Officials in West Dundee, Illinois have proposed a plan which could make their downtown area the tax capital of the United States. Earlier this year, the village board approved a measure designating a portion of downtown West Dundee a Special Services Area (SSA). This allows village officials to impose additional taxes in that area. After raising the sales tax by one percent earlier this year, the village is now proposing to increase property taxes in the SSA by more than 14 percent. The revenue generated by the additional tax would be used to fund debt service obligations related to a $2,000,000 bond issued by the village last year. If approved, property owners in the downtown West Dundee SSA will pay among the highest property taxes in the United States.
According to many impacted property owners, the village’s economic rationale for the tax increase is not credible. For homeowners and small businesses in the SSA, the new taxes could bring extreme economic hardship. Furthermore, they say the geographic boundaries of the SSA appear arbitrary.
Bonnie Yates lives in a charming, historic home on Main Street. The home is located on the property where famed detective Allan Pinkerton once had his home and cooperage—and there are rumors that Pinkerton’s home was a stop on Harriet Tubman’s Underground Railroad. 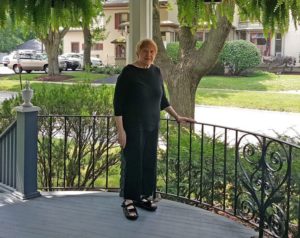 Bonnie Yates, 77, on the porch of her historic home in West Dundee, Illinois. The town is proposing a new taxing zone that will increase Yates’ property taxes by more than $1,100 per year. The building across the street from her is a law firm. They are not included in the SSA, which will save them an estimated $1,450 per year.

When Yates, 77, bought the property in 1989, the home was in serious disrepair. She spent thousands of dollars restoring the structure, and many thousands more maintaining it over the years.
In January 2016, village officials notified Yates that her home was included in the SSA, and that her taxes would increase. Yates was surprised, however, to find that the law firm just across the street from her was not located in the SSA. This means they are not subject to the new tax increase, which would amount to $1,450 per year for their law firm’s office. Also not included in the taxing zone were multiple businesses located along five additional blocks of Main Street.
When Yates contacted the village to learn more, she was told by a village official that her tax increase would amount to “only a few hundred dollars a year.”
However, Yates received a letter the following week, stating that the village had miscalculated the tax amount. The actual tax increase would be approximately ten times higher than what had been presented at the village board meeting just two months earlier. According to this letter, Yates’ property taxes would jump by more than $1,100 per year.
At 77 years old, Yates still works full-time as a marriage and family counselor. She says she would like to retire, but can’t afford to—especially if her property taxes will increase so substantially.
[trx_quote title=”Bonnie Yates”]I want to do my part to help the village, but it’s getting to be a burden at my age. I want to be able to retire without losing my home.”[/trx_quote]
The West Dundee Village Board will be holding a hearing and vote during its regular board meeting on Monday, August 22, regarding the proposed property tax increase in the downtown business district. The meeting begins at 7:30pm upstairs at the Village Hall, 102 S. 2nd St. (1/2 block south of Rt. 72).
Save
Save
Save
Save
Save
Save
Save

Media and concerned taxpayers should contact Julie Fox, Chair of the Fox Valley Libertarians, for more information. She can be reached at:  juliefox@fvlp.org