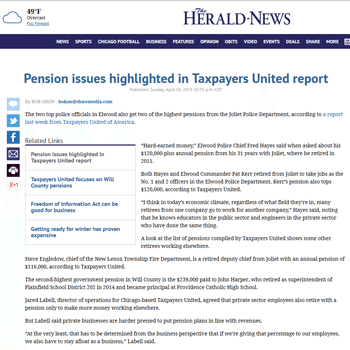 The two top police officials in Elwood also get two of the highest pensions from the Joliet Police Department, according to a report last week from Taxpayers United of America.

“Hard-earned money,” Elwood Police Chief Fred Hayes said when asked about his $120,000-plus annual pension from his 31 years with Joliet, where he retired in 2011.
Both Hayes and Elwood Commander Pat Kerr retired from Joliet to take jobs as the No. 1 and 2 officers in the Elwood Police Department. Kerr’s pension also tops $120,000, according to Taxpayers United.
“I think in today’s economic climate, regardless of what field they’re in, many retirees from one company go to work for another company,” Hayes said, noting that he knows educators in the public sector and engineers in the private sector who have done the same thing.
A look at the list of pensions compiled by Taxpayers United shows some other retirees working elsewhere.
Steve Engledow, chief of the New Lenox Township Fire Department, is a retired deputy chief from Joliet with an annual pension of $116,000, according to Taxpayers United.
The second-highest government pension in Will County is the $239,000 paid to John Harper, who retired as superintendent of Plainfield School District 202 in 2014 and became principal at Providence Catholic High School.
Jared Labell, director of operations for Chicago-based Taxpayers United, agreed that private sector employees also retire with a pension only to make more money working elsewhere.
But Labell said private businesses are harder pressed to put pension plans in line with revenues.
“At the very least, that has to be determined from the business perspective that if we’re giving that percentage to our employees, we also have to stay afloat as a business,” Labell said.
Taxpayers United has been on a pension crusade for months, spotlighting government pension benefits for state employees and in counties across Illinois. The release of Will County numbers was its latest report aimed at drawing attention to the size of government pensions.
Labell said Taxpayers United does not want to change what retirees are getting. But it does want to see changes in what new employees get and even what current employees put into their pensions.
“We understand that people who decided to be police officers and teachers went in with expectations,” he said.
But Labell said he hears from young police officers and teachers worried retirement money won’t be there because of government pension problems.
Hayes, who also is president of the Illinois Association of Chiefs of Police, said he, too, hears that concern from young police officers.
“They’re asking if these funds are sustainable and if they will be available in the future,” Hayes said. “It is important that we make some changes so the system is sustainable.”
One of the top pensioners at Joliet Junior College is Andy Mihelich, a former administrator who gets $138,000 a year. Mihelich is retired, but active. He is chairman of the Joliet Junior College Board of Trustees and just ran an unsuccessful bid to become mayor of Joliet.
Mihelich said he has been prepared for his pension to be capped.
“I thought there would be pension reform in Illinois,” he said. “I’ve been waiting, but no one in Springfield seems to want to do anything.”
Back to Top