Click HERE for printable version of the flyer.
“Rep. Hammond betrayed her constituents and all Illinois taxpayers when she became a turncoat and supported Chicago machine boss and Ill. House Speaker Michael J. Madigan (D-22, Chicago),” said Jim Tobin, TUA President.
“Hammond and her fellow Republican traitors made possible the largest permanent income tax hike in the state’s history, increasing the personal income tax rate to 4.95 percent from 3.75 percent, and the corporate income tax rate from 7.75 percent to 9.5 percent. Most of the $5 billion from this latest income tax increase will be funneled into the state’s floundering government-employee pension funds, just like previous income tax increases.”
“Illinois is bankrupt. No state tax increase of any size can pull Illinois out of its financial death-spiral. In November 2018, taxpayers need to put on the statewide ballot a constitutional amendment to repeal the pension-protection clause of the Illinois State Constitution. The lavish, gold-plated pensions of retired government employees need to be drastically cut.”
“In the next Republican primary, taxpayers need to run a tax-cut candidate against Norine Hammond and her fellow tax traitors. These ne’er-do-wells have disgraced the conservative principles of their political party.”
“We will be distributing ‘Wanted’ flyers throughout Hammond’s district, showing her behind bars, as well as giving her negative notoriety across the state. If Hammond has any sense, she won’t run again. Illinois taxpayers need to dump tax-raising Republicans-in-name-only and elect true fiscal conservatives.”
Link To Previous TUA Tax Traitor News Release. 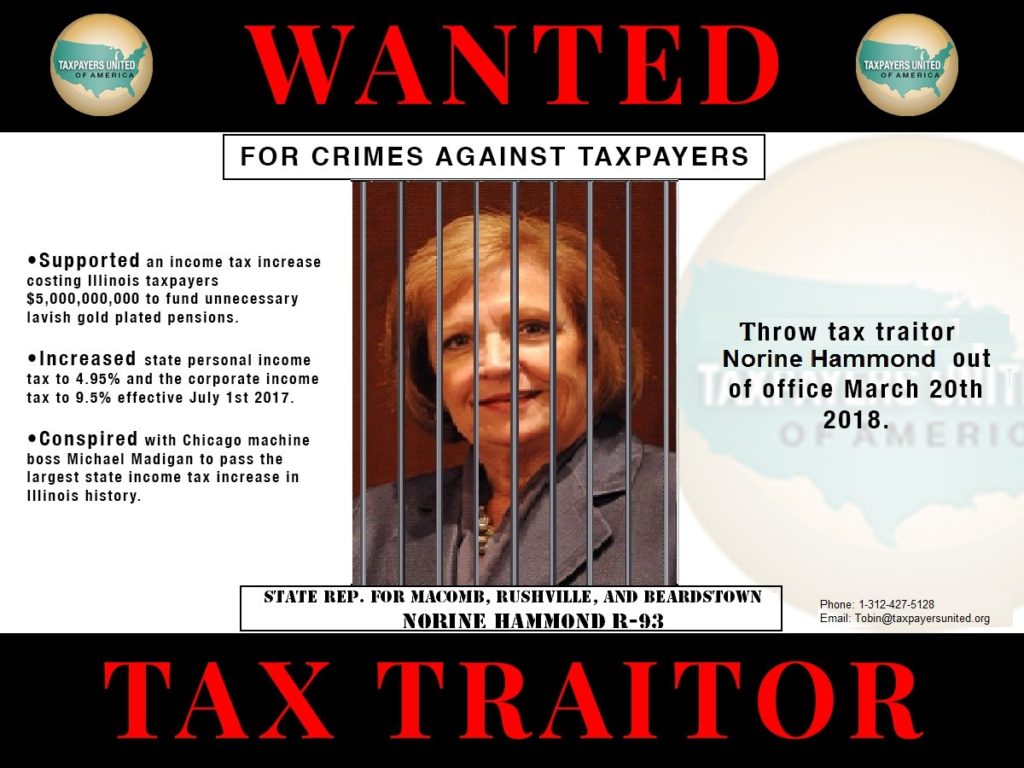