Tax Day 2017 has passed for individual taxpayers, but America’s tax bill is still due, and it’s a big one.
Taxpayers won’t pay off this year’s local, state, and federal tax burden totaling $5.1 trillion until April 23, or as the Tax Foundation calls it, Tax Freedom Day. That day, calculated annually, represents how long Americans work to pay local, state, and federal taxes for the year.
By the Numbers
In 2017, it will take 113 days for taxpayers to pay the country’s tax burden, which includes $1.5 trillion in local and state taxes and $3.5 trillion in federal taxes, equaling 31 percent of America’s income. But that’s not all. If you include federal borrowing, which represents future taxes the government must collect to pay the bills, Tax Freedom Day would occur 14 days later this year on May 7.
To put this year’s total tax burden into perspective, the latest date for Deficit-Inclusive Tax Freedom Day took place during World War II almost three weeks later than this year’s date, occurring on May 25, 1945.
How Expensive is Government?
Americans will collectively pay close to $1 trillion more dollars for taxes than will be spent on essentials like food, clothing, and housing combined.
The federal deficit is expected to shrink by $45 billion to $612 billion in calendar year 2017, but the track record over the past few decades is not comforting. The cost of the federal government has surpassed its tax revenues since 2002, racking up budget deficits exceeding $1 trillion annually from 2009 to 2012.
According to the Tax Foundation’s data, Tax Freedom Day has changed dramatically over the past century. Notice how the date of Tax Freedom Day correlates with significant expansions of government since 1900, especially when considering the deficit-inclusive figures: 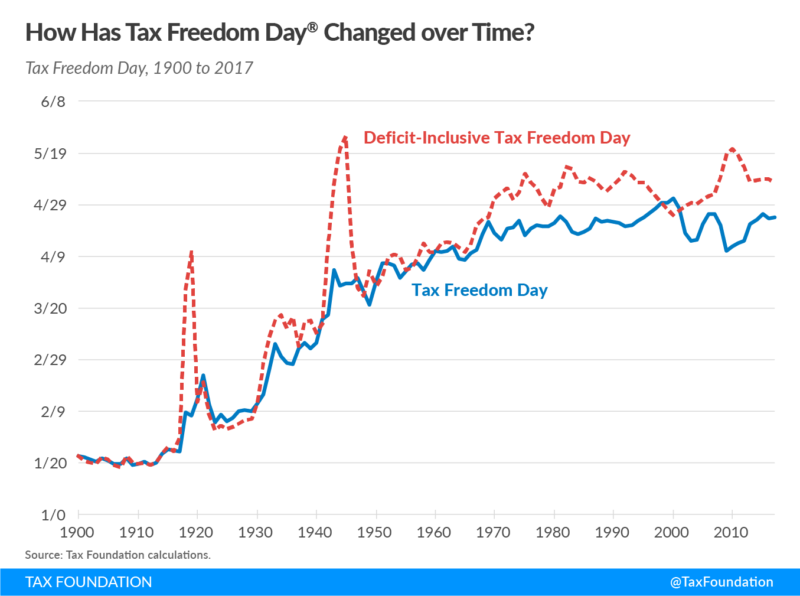 Focusing on Deficit-Inclusive Tax Freedom Day, economic liberty in America shifted abruptly in favor of the government while Woodrow Wilson was president. Wilson ushered in the Revenue Act of 1913 which re-imposed the federal income tax after the ratification of the 16th Amendment, followed soon after by the creation of the Federal Reserve in late 1913, and both led the way for deficit financing that enabled U.S. entry into World War I. After a subsequent reduction in federal tax burdens in the 1920s, the trend began to worsen considerably and hastened in the 1930s. American taxpayers then saw a substantial spike in government spending, deficits, and state power during Franklin Delano Roosevelt’s presidency and World War II.
Taxpayers saw a dramatic improvement in their financial freedom following World War II when overall tax burdens decreased in the 1950s, similar to the trend in the 1920s in the aftermath of World War I. But this new norm in the 1950s meant an additional two months of work to pay the government’s tax burden when compared to just a few decades prior. The overall trend, unfortunately, has been in the direction of Tax Freedom Day occurring later over the past sixty years, and considerably later compared to the trend of the past century, meaning less freedom from onerous taxation for Americans.
Tax Freedom in the States
Tax burdens vary considerably state by state due to different tax policies and the progressive federal tax system. Each state has its own Tax Freedom Day which factors in local, state, and federal tax burdens for the taxpayers in their respective states. 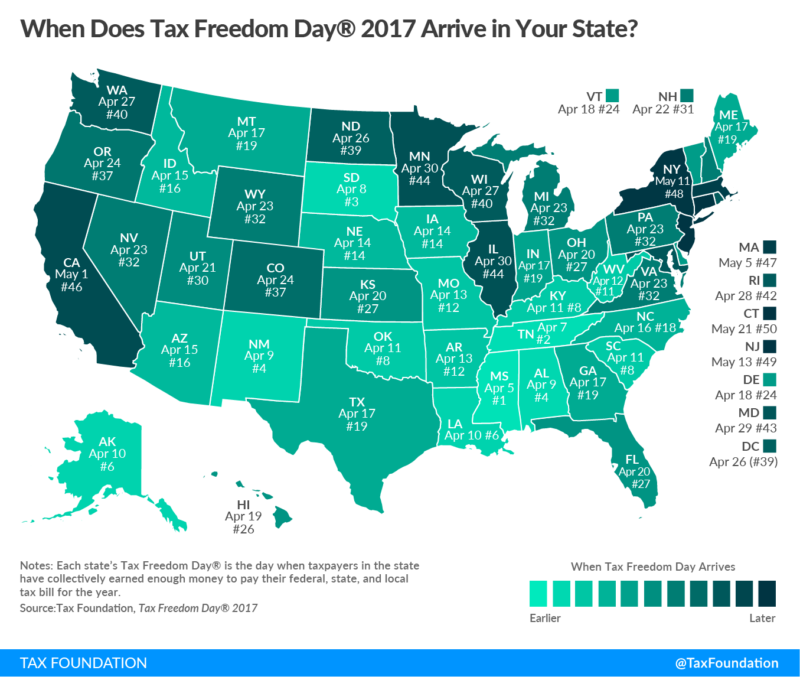 States like Connecticut (May 21, #50), New Jersey (May 13, #49), and New York (May 11, #48) have higher taxes and residents earning higher incomes, so they celebrate Tax Freedom Day later than states like Mississippi (April 5, #1), Tennessee (April 7, #2), and South Dakota (April 8, #3), which bear the lowest tax burdens in 2017.
Taxes Are Revolting, Why Aren’t You?
The introduction of the Wilson era federal income tax and the Federal Reserve allowed for expansive government power and deficit financing. This also shifted the primary means of funding the government to income taxes and away from tariffs, as had been the practice. The federal government claims a right to your earnings and livelihood, essentially offering the ultimatum: your money or your life. Sheldon Richman wrote a book by that very title and argues that the income tax must be abolished altogether.
Reasonable people from various political viewpoints can disagree about how our tax dollars are spent or whether our earnings should be confiscated whatsoever, but Tax Freedom Day helps to put Americans’ overall tax burden into perspective. Furthermore, it highlights the paramount principle regarding the rights of individuals and government power:
If Americans are forced to work nearly one-third of the year just to pay taxes to the government, then how free are we?
View as PDF