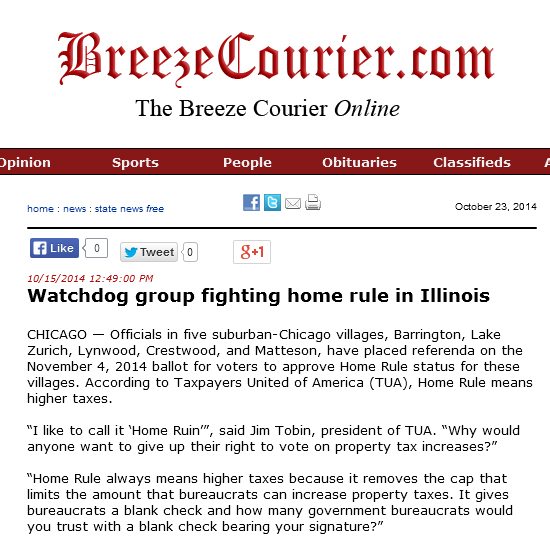 CHICAGO — Officials in five suburban-Chicago villages, Barrington, Lake Zurich, Lynwood, Crestwood, and Matteson, have placed referenda on the November 4, 2014 ballot for voters to approve Home Rule status for these villages. According to Taxpayers United of America (TUA), Home Rule means higher taxes.
“I like to call it ‘Home Ruin’”, said Jim Tobin, president of TUA. “Why would anyone want to give up their right to vote on property tax increases?”
“Home Rule always means higher taxes because it removes the cap that limits the amount that bureaucrats can increase property taxes. It gives bureaucrats a blank check and how many government bureaucrats would you trust with a blank check bearing your signature?”
“Home Rule also gives local government authority to tax nearly any product or service they want. What they don’t tell you is that such taxation drives consumers to neighboring communities where the taxes on products and services is lower.”
“And if high taxation isn’t enough, Home Rule is used extensively to add regulations, fees, and licensing that create even more red tape for business and entrepreneurs.”
“We are helping taxpayers in each of these communities by revealing the truth about home rule and how damaging it is. We are working with local activists and organizations to educate voters on Home Rule.”
“Government needs to live within its means and cut spending when revenue declines. Eighty percent of Home Rule and other local taxes go to pay government employees and their benefits. By adding new taxes, government bureaucrats ensure their own high pay and lavish pensions.”
“Illinois currently has more than 11,054 annual state pensions over $100,000 and more than 78,526 government pensions over $50,000 a year. It is mathematically impossible to raise enough taxes to sustain the defunct state pension system and yet every unit of government continues to try.”
“Illinois has one of the highest foreclosure rates in the country and you have to wonder how many people could have stayed in their homes if the property taxes weren’t so high – the second highest property taxes in the country.”
“We are urging voters in these 5 communities to retain their right to vote on property tax increases by voting no on Home Rule on November 4, 2014.”