View Release as PDF
Chicago – August 17, 2014 is the 25th anniversary of an event that energized an anti-tax movement in Illinois and across the United States.
An angry crowd of 250 senior citizens protesting the Medicare Catastrophic Coverage Act of 1988, signed by Pres. Ronald Reagan on July 01, 1988, chased down Congressman Dan Rostenkowski (D-IL), chairman of the House Ways and Means Committee, forcing him to take refuge in his limousine after he refused to meet with them. 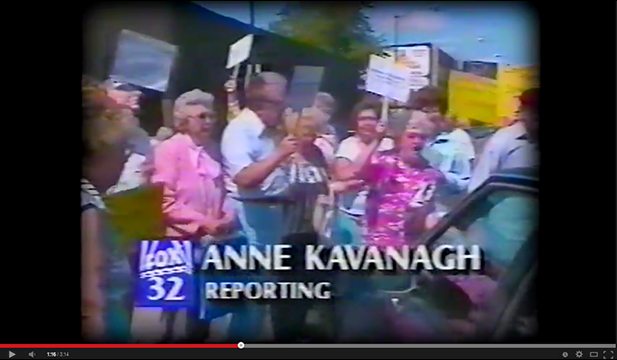 The video of the protest displays a level of grassroots outrage that has not been seen since.
The senior citizens were demanding the repeal of this act, which according to the Medicare Newsgroup, capped out-of-pocket expenses, expanded skilled nursing facility and hospital benefits, and offered outpatient prescription drug coverage. 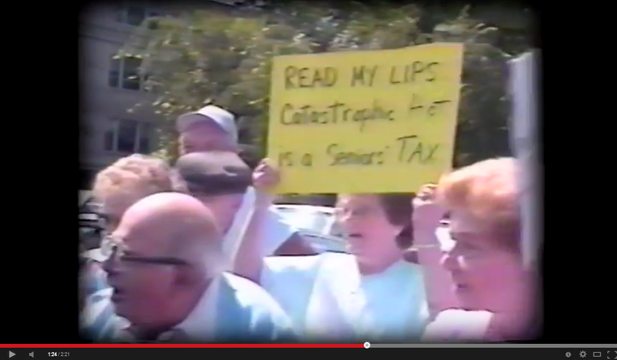 Beneficiaries were forced for the first time to foot the entire bill. A supplemental premium, basically an income tax on 40 percent of the elderly (up to $800 per year for an individual and up to $1,600 per year for a couple), was put in place.
The seniors stood in front of Rostenkowski’s limousine, preventing it from moving. Rostenkowski ran from the limousine, and later when the coast was clear, reentered it and fled.
Most seniors opposed this new tax on all senior citizens, and the seniors chasing down tax-raiser Rostenkowski were members of the Chicago-based Taxpayers United of America (TUA).
The tax on seniors was repealed December 13, 1989 as a result of the protests.
“This is the first time a major federal entitlement had ever been repealed,” said Jim Tobin, founder and president of TUA. “This bill increased taxes on all senior citizens, for the benefit of the few needing catastrophic care. It was this incident with Rostenkowski that singlehandedly brought national press coverage to the tax revolt against Reagan’s tax on seniors.”
In 1996, Rostenkowski was sentenced to 17 months in prison for corruption. According to the indictment, Rostenkowski bilked taxpayers out of more than $500,000. He died of cancer in 2010 at the age of 82.