Are Illinoisans Preparing for a Tax Revolt?

View as PDF Chicago — On October 12, 2016, dozens of Illinois taxpayers from Taxpayers United of America (TUA) and Illinois Tax Revolution (ITR) converged on the Thompson Center in downtown Chicago to protest devastating property tax hikes, calling for immediate reforms at the local and state level.
ITR co-founders Bob Anderson of Wonder Lake, Joe Tirio of Woodstock, and Dan Aylward of McHenry have organized two previous tax protests since founding their new grassroots movement this past summer. They made headlines earlier this year when members of the newly formed group began paying the first and second installments of their property tax bills in dollar bills. 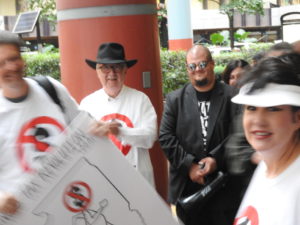 Working with TUA, both groups are pursuing systemic changes to local and state government in Illinois, including property tax relief, government pension reform, and consolidating school districts and the roughly 7,000 taxing bodies in Illinois, or eliminating some of them altogether.
“The Cato Institute recently published its annual Freedom in the 50 States analysis, and unfortunately for our residents, Illinois is ranked 44th for fiscal, regulatory, and personal freedom policies overall,” said Jared Labell, executive director of Taxpayers United of America (TUA).
“The study clearly explains why Illinois is one of the most fiscally irresponsible states today. Whether it’s regarding local taxes (ranked 49th), government subsidies (ranked 47th), government debt (ranked 44th), or overall fiscal policy (ranked 48th), Illinois’ state and local governments are getting away with highway robbery every day that they operate on taxpayers’ dollars without implementing long-lasting reforms to solve their perpetual fiscal nightmare.” 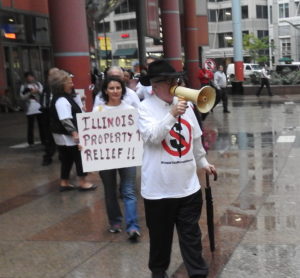 “Illinoisans’ residential property-tax burden has risen by 76 percent in the last quarter-century. In the span of just a few decades, residential taxpayers now pay more than two-thirds of all property taxes in Illinois, which has the second-highest residential property taxes in the country.”
“We are proud to be working alongside the members of Illinois Tax Revolution in our pursuit of rolling back property taxes, reforming government pensions, and eliminating financially burdensome and unnecessary taxing bodies in Illinois,” said Labell.
“Our concerns will be taken to Springfield during the fall veto session, and we intend to speak with the leadership of the Illinois General Assembly and Gov. Rauner (R) to ensure that government officials hear our grievances loud and clear. With the help of our supporters and taxpayers across Illinois, there is no doubt that our message will be heard and addressed.”
“Nearly forty years after TUA’s founder and president, Jim Tobin, led his successful property tax strike, another tax revolt is on the horizon and portends to be more widespread. Taxpayer outrage can only be quelled by reducing the tax burden currently smothering average folks across Illinois,” said Labell. “The politicians would prefer that we remained silent, but we have a message for the taxpayers of Illinois: Taxes are revolting, why aren’t you?”