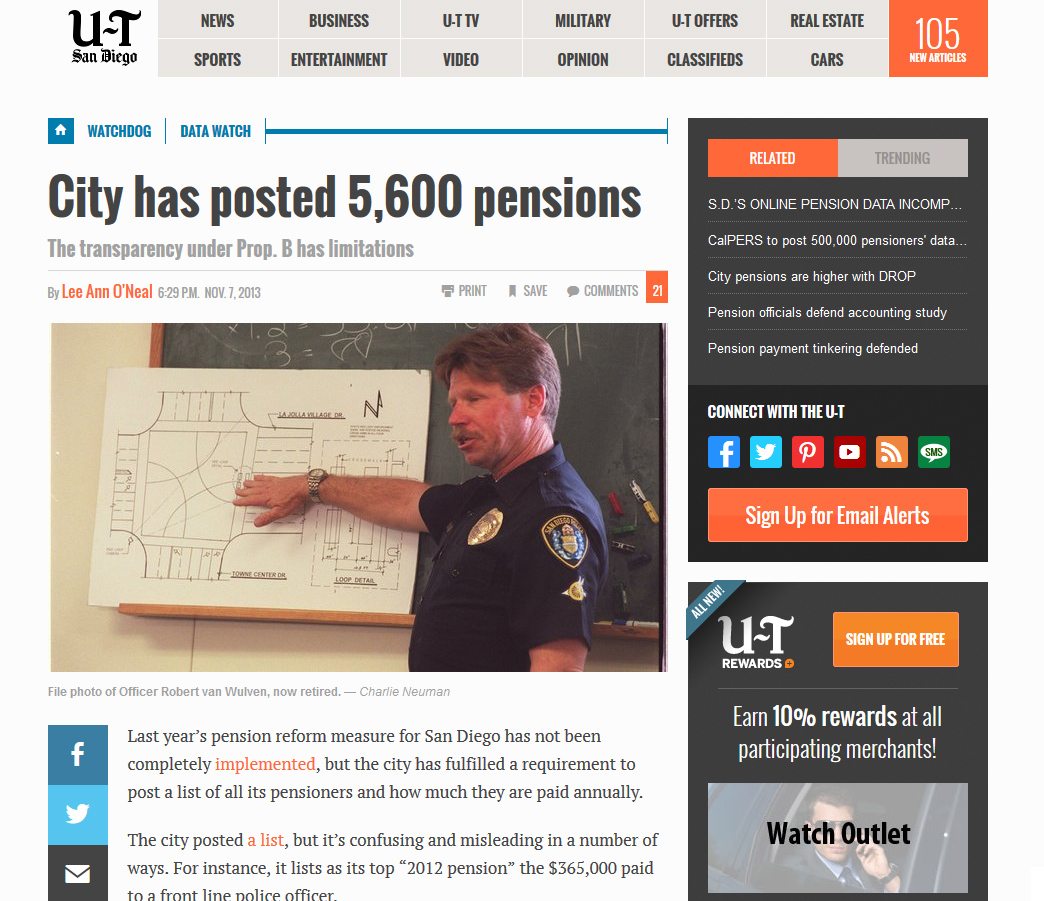 Last year’s pension reform measure for San Diego has not been completely implemented, but the city has fulfilled a requirement to post a list of all its pensioners and how much they are paid annually.
The city posted a list, but it’s confusing and misleading in a number of ways. For instance, it lists as its top “2012 pension” the $365,000 paid to a front line police officer.
The listing provides no further information about the officer, not even a name, but U-T Watchdog followed up and found the pensioner in question is retired Officer Robert van Wulven, whose annual pension is about $73,000.
Van Wulven’s payment for 2012, as listed by the city, included a $291,738 lump-sum payout from a special retirement account into which he received retirement benefits while still working. That supplemental money is supposed to last van Wulven, 56, for the rest of his life.
The list posted by the city on its website contains these kinds of vagaries throughout, so getting a true picture of the annual benefits collected by retired employees without additional data and records requests is impossible.
[ Download spreadsheet created by U-T from city document ] The list was posted as required by Proposition B, the pension overhaul passed with 66 percent of the vote in June 2012. The measure mandated 401(k)-style retirement plans, instead of guaranteed pensions, for most new city workers. Not all of its provisions have been put in place by the city, including a ban on pensions for city workers who commit felonies on duty.
The pension posting includes the final job title, years of service, and a total of payments made to that person from the pension system — including regular pensions and special account payouts all in one sum. For retirees who opted to roll their special funds into an individual retirement account, those funds are broken out separately.
The numbers shown appear simple but are not.
“It’s more of a keyhole than a window, but you do get a peek, and I applaud them for presenting it,” said Bill Holder, dean of accounting at the University of Southern California, who served for 10 years on the Governmental Accounting Standards Board. “The more sunlight that’s brought to bear on it, in my view, the better.”
Important information needed to measure adequacy or generosity of a pension benefit is not provided — salary information, hire date and age at retirement. Because there are no names attached, a multiple-year analysis is also not possible based solely on what’s on the city website.
It’s also difficult to discern whether the data released by the city shows a full year for each pensioner, because many have a partial year of payments when retiring and upon dying, which is not noted in the data.
The posting does mark progress in transparency when compared to the information made available by other governments.
Rae Ann McNeilly has obtained pension data from around the country for the Chicago-based Taxpayers United of America.
“Of the 19 states that I’ve analyzed pensions for, I’ve not yet seen the city or any level of government post pensions on a website, with or without a name,” McNeilly said. “There are 17 states that I’m aware of that don’t provide names and pension amounts.”
McNeilly said including names in the San Diego posting would be preferable, allowing people to “connect the dots on who the money is attached to.” She likened the current disclosure to a database of vendor payments with no company or contractor name attached.
“Those pensions are funded with tax dollars,” McNeilly said. “Any taxpayer-funded expenditure, the taxpayers have a right to review.”
The 2012 ballot measure explicitly said names would be omitted, “in a manner that protects the privacy rights of officers and employees.”
An unnamed fire captain took home the biggest total payment in 2012 of $694,315, including a $618,684 one-time rollover payment from the special account, the data shows.
The special accounts are part of the Deferred Retirement Option Plan, available to employees hired before 2005. They can begin collecting their retirement while still working, placing the funds in a special account for up to five years while still collecting a paycheck. They also cease accruing benefits when entering the program.
Among all retirees receiving pension payments in 2012, the median years of service was 25. The median payment listed under the city’s flawed “pension payment” column was $42,568.
Officer van Wulven said he doesn’t mind the pension transparency, even though he believes it will be used by people who wish to “mislead the public based on their particular agenda.”
He served more than three decades with the Police Department and said frustration directed at public-sector workers is better placed at the feet of officials who in past years failed to make full payments to the system.
“I’m not a millionaire by any means,” van Wulven said. “I worked for a long time and earned my pension, and I contributed to it, just like the city was supposed to.”

Whiteout Press | List of highest government pension recipients in US

Findings from TUA’s nationwide pension project are featured in this story from Whiteout Press.

May 1, 2013. San Francisco. The taxpayer watchdog group Taxpayers United of America just released a list of the highest, multi-million dollar pension recipients from America’s government employee retirees. The details shed light on two ever growing concerns. One, government employees are bankrupting the nation with their exorbitant pensions. And two, the most blatant violators are from the San Francisco area, home of big government progressives.
Recently, Americans were outraged at the news that an Alameda County, California administrator – Susan Muranishi – was receiving a lifetime, annual, taxpayer-funded retirement payment of $423,000. But research by Taxpayers United of America (TUA) in the months since has turned up even more examples of blatant self-enrichment on the part of government bureaucrats, including offenders worse than Muranishi in Alameda County.
Digging up the details
“We have completed analysis of government employee salaries and pensions in nineteen states across the country,” explained TUA Executive Director Rae Ann McNeilly, “and while Ms. Muranishi’s pay is on the high end of the scale, it just isn’t as uncommon as you might think.”
As McNeilly points out, the below list of pension millionaires is taken from just 19 states. The remaining states are fighting as hard as they can to keep the golden parachute pensions of their state’s government employees secret. Based on the shocking findings below, readers can see why.
“How did pensions ever get so outrageous?” asks McNeilly, “These grotesque pension payments have far exceeded any possible original intent of adequately compensating ‘civil servants’ for meager wages that lean government budgets could barely afford for basic services. No, the pension scam has become the number one tool of corruption for top government union bosses to stay in power and to reelect those that would make such deals with the devil.”
Taxpayers United of America’s Rae Ann McNeilly goes on to detail how trillion-dollar government pension programs have taken on a life of their own, infecting every check and balance the system has to prevent such abuse. She explains, “To ensure the scam proliferates, lavish pensions have been awarded to the legislators who would vote on this issue. This keeps them protected by the state’s laws. And for judicial certainty, the very judges who might rule on any challenges to the system have themselves been made part of the conspiracy with gold-plated retirement security of their own.”
Top lifetime government employee pension recipients (from Taxpayers United of America):
*Note, the below estimated total pension amounts are just that, estimates. They are based on each recipient’s yearly pension payment multiplied by average life expectancy.

As Taxpayers United of America reminds us, only 19 states provide details concerning the pension amounts that taxpayers are forced to pay retired government employees. The rest of the states are fighting tooth and nail to keep it secret. With so many states’ pension funds missing tens of billions of dollars, they’re being forced to drastically raise taxes and cut services to pay for the lavish retirements.
Currently, the 50 states have an estimated combined debt of $4.2 trillion. Of that amount, as much as $2.8 trillion is owed to retired government employees. Some states, like President Obama’s home of Illinois, have an unfunded pension liability of roughly $100 billion. There was a time not long ago that a number like that represented the United States’ entire national debt. Now, it’s just the missing pension money from one single state. It that doesn’t illustrate the enormity of the problem, nothing will.

TUA’s work on California’s pension crisis is mentioned in this post at CalWatchdog.com.

If you have not read or heard anything about California’s unfunded public employee pension crisis, you’ve probably been living under a rock or, like union bosses and too many members of the state Legislature, the governor’s office and local elected officials, you are happily in denial.
Tensions are mounting too as pension deniers or pension reform “obstructionists, as Mercury News writer Daniel Borenstein called them, are attempting to publicly shame those of us pointing out that pension liabilities could bankrupt California without serious reform.
Borenstein is joining CalWatchdog contributor Steven Greenhut and David Crane, a former California State Teachers Retirement System board member,  and me for a panel on pension reform in San Francisco on Thursday.The unions have already gone on the attack about the event.
“Spotting my scheduled appearance on an upcoming conservative think-tank panel to discuss public-employee pensions, union spokesman Steve Maviglio went into Twitter attack mode last week,” Borenstein wrote for the Mercury News.
“@stevenmaviglio branded me a ‘pension basher’ and called my ethics into question. His sad attempt to divert the debate badly mischaracterizes my position and further undermines serious discussion of a complex issue.”
Fortunately as unions get louder so do the cries from taxpayers and advocacy organizations.
Christina Tobin, Founder and Chair of Free and Equal Elections Foundation and Vice-President of Taxpayers United of America, this week has been holding press conferences in California cities to draw increased attention to California’s pension crisis, including a planned event in Fresno on Wednesday and San Francisco on Thursday (in the morning before the reform panel).
Instead of denying the flood of economic problems looming because of pensions, it’s time to face the facts and fix the problem.