TAX SURVEY OF GOV. RAUNER AND

CHICAGO—Taxpayers United of America (TUA) today released its 17th biennial Tax Survey of the Ill. General Assembly.
Click here for exclusive access to our 17th biennial Tax Survey
“Our survey examines the tax and spending bills of the 99th Illinois legislature from January 2015 to January 2017,” said Jim Tobin, TUA President. “Our analysis provides data on how the legislators voted on bills featured in our tax survey. For 41 years, TUA has educated taxpayers while publicizing all significant tax and spending increases voted on by the Illinois General Assembly. TUA has used the same methodology to evaluate each lawmaker’s record since publishing its first Tax Survey in 1983.”
“The 99th General Assembly has been a huge disappointment in the Ill. Senate,” said Tobin. “Not a single member of the Senate – no Republican or Democrat – received a passing score of 70% or more on this Tax Survey. The Republicans scored better in both chambers with average scores of 41% in the Senate and 66% in the House, whereas the Democrats achieved only 4% in the House – and only 1% in the Senate!  That brings the total number of Democrats that scored zero to 91.”
“Some turncoat Republicans in the Illinois house voted for the record-breaking state income tax increase in the 100th General Assembly. Republican House members who voted for this job-killing measure could not be counted among ‘Taxpayer Friends,’ regardless of their score in this edition of the TUA Tax Survey.”
“Notably, Gov. Bruce Rauner (R) outclassed his predecessor, disgraced former Democratic Gov. Pat Quinn, who received a sorry 10% on TUA’s 16th biennial Tax Survey. Gov. Rauner is the first Illinois Governor to score above 70% on the TUA tax survey, achieving a score of 92%, and we are pleased to feature him on the list of Taxpayer Friends.”

ABC 7 | Some Illinois retirees getting millions from taxpayers

Taxpayer Education Foundation’s recent study on pensions was featured in a story by ABC 7 on the amounts of Illinois pension payouts. 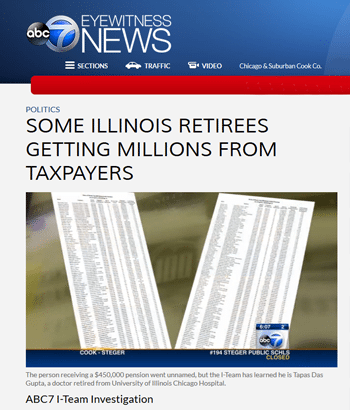 “One out of every four dollars taken from taxpayers by the state goes into a system that is giving more than $11,000 government retirees tax-free, six-figure pensions worth as much as, in one case, $450,000 per year,” Rauner said.
Government pensions in Illinois are tax-free by Illinois, one of the few states that does not tax government pensions. Federal taxes are not exempt.
READ: Illinois’ top government pensions
The person receiving a $450,000 pension went unnamed, but the I-Team has learned he is a man named Tapas Das Gupta, a doctor retired from University of Illinois Chicago Hospital. Currently taxpayers are footing his annual pension of $452, 843, but what the governor didn’t mention is that the No. 2 top pensioner also makes about that much.
According to state pension records obtained by the I-Team, there are dozens of retired state workers with pensions of more than $200,000 per year, several at more than $300,000, and two atop the list at more than $400,000. The tax-free money is subsidized by taxpayers.
No. 1 is the UIC doctor, Tapas Das Gupta, a surgical oncologist schooled in Calcutta, India and who retired at 72.
Runner-up top state pensioner is Dr. Edward Abraham, a UIC orthopedic surgeon educated in Beruit, Lebanon, who retired at age 66 and receives a $439,000 a year pension.
Even as he receives that pension, Dr. Abraham has been hired back here at UIC part-time. It’s double dipping that is perfectly legal in Illinois and that other state pensioners take advantage of.
According to state records, Abraham is projected to receive more than $9 million in pension payouts from the State of Illinois during his retirement.
And there are dozens of retirees whose lifetime payouts are expected to be between $5 and $10 million.
The top-grossing state pensioner is expected to be a former kindergarten teacher, now retired school from his job as superintendent of Lincolnshire District 103, Larry K. Fleming. After retiring recently at age 55, Fleming is projected to receive $11, 535, 660 during the rest of his life.
Nearly all of the biggest state pensions are being paid to university medical doctors, local school administrators and teachers. In his speech Wednesday, the governor said those retirees- and all current state pensioners- will get everything they were promised, but that changes are needed for future state retirees.

It’s What You Didn’t Say, Governor!

View as PDF
Chicago – Republican Gov. Bruce Rauner delivered his first State of the State address to the Illinois General Assembly Wednesday, beginning his inaugural term as governor by outlining his own approach to a number of critical issues plaguing taxpayers.
Taxpayers United of America’s (TUA) director of operations, Jared Labell, said that today’s speech was a mixed bag of positive steps and setbacks for taxpayers. “We’re glad to hear Gov. Rauner supports government reforms that will reduce the size and cost of government by consolidating offices, leveraging purchasing power and returning some control to local government while reducing the more than 7,000 government taxing authorities.”
Labell was also optimistic about Gov. Rauner’s forthright discussion of the government unions’ power and conflict of interest with the taxpayers. “It’s about time a state’s chief executive connected the dots between the union thugs, campaign contributions, and the ever expanding government employee pensions, an issue on which TUA has been at the forefront for nearly a decade.”
“These lavish, gold-plated government pensions are the most critical financial challenge for Illinois. The taxpayers who have their hard-earned paychecks looted to pay for billions in government largesse are really hurting, being forced to work longer and harder, sacrificing their own retirement savings to fund the government retiree lifestyle.”
“My optimism over the implications of Gov. Rauner’s fiscal policy on taxpayers vanished with his glaring omission of how he would pay for the big spending increases in the education and prison systems. Gov. Rauner has made it known throughout his campaign that he supports broadening the Illinois state sales tax to include numerous services, including advertising, storage, and printing. He wants to, and barely mentioned, ‘broadening the tax base’, but has not mentioned lowering the sales tax rate itself,” said Labell. “I guess we will have to wait for his budget speech to see if the governor’s proposal is really just a massive tax increase for average taxpayers, who would be hardest hit by such an indiscriminate tax hike.”
“Raising taxes in any way before addressing the real budget problem, the unsustainable government pension system, is counterproductive and irresponsible. There are steps that can be taken immediately, such as placing all new government hires in retirement savings accounts and increasing employee and retiree contributions to healthcare premiums,” concluded Labell.