Teachers’ Retirement System Millionaires – It’s Not For the Children

View as PDF
CHICAGO—Taxpayers United of America (TUA) today released the results of their updated analysis of Illinois’ Teachers’ Retirement System (TRS).
“In forty years of fighting government fraud, waste and abuse, nothing compares to TRS,” stated Jim Tobin, TUA president.
“This group of government employees uses our children as pawns in their demand for higher wages and benefits and yet there is no accountability, no measure of what makes a good teacher, and no way to get rid of the bad ones. All of the annual pensions on the TRS Top 200 are greater than $185,000.”
“Illinois overpays its teachers in the classroom and in retirement. 80% of all of those property tax and income tax increases go to fund government employee salaries and benefits. Clearly, it is not for the children,” added Tobin. 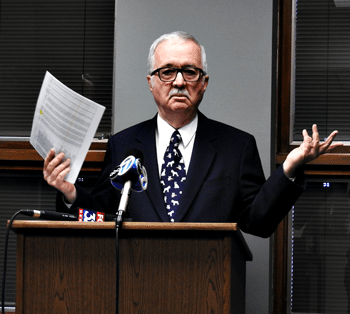 “These are not poor civil servants! The average Illinois government teacher salary is $69,538 – that average includes part-time teachers. Nearly half of the Top 200 TRS pensioners collect more in retirement than their final salary while employed.”
“Consistent with our findings of JRS and GARS, taxpayers have already paid more than their fair share of retirement benefits for these government teachers. Taxpayers made their payments on time and in good faith and yet these government employees expect us to pay again, and again.”
“Just a couple of examples of what these ‘poor civil servants’ are forced to live on in their retirement, that is if you can call it retirement at the age of 58, underscore the lavish, gold-plated government pension problem in Illinois,” said Tobin.
“Lawrence A. Wylie tops our list with a stunning $312,081 annual pension benefit! The accumulation of those payments will, over a normal lifetime, reach a cool $3.1 million. His contribution to that gold-plated pension was only $366,522.”
“John R. Harper tops the list for estimated lifetime payouts. Retiring at only 54, he could collect more than $11.1 million in taxpayer funded pension benefits. His current annual pension is a very comfortable $239,019.”
“Donald V. Strong tops our list for the highest total government pension collected to date at $3,633,776. His own payment into this extravagant government pension was a meagre $95,659.”

“We are hopeful that taxpayers will put Illinois Speaker of the House Michael J. Madigan (D) and his cronies out of business. It is impossible to defend this system any longer. To expect taxpayers to bail-out the bloated promises of powerful politicians is just criminal,” charged Tobin.
“Boss Madigan has had the Illinois taxpayers in his death grip for far too long. Every taxpayer needs to vote in the upcoming General Primary on March 15, 2016 and vote out every incumbent who has played a part in taxpayer abuse that strips wealth from us to put in the pockets of the government retirees.” concluded Tobin.
*Lifetime estimated pension payout includes 3% compounded COLA and assumes life expectancy of 85 (IRS Form 590).
**Blank spaces in the data are intentional and due to government redactions or withheld data points in response to Freedom of Information Act requests.
Save
Save