Roselle- “It’s unconscionable that taxpayers are footing the bill for excessively generous salaries and pensions and finding those they hire put their children in the hands of unscrupulous administrators and predatory teachers and coaches,” stated Matthew Schultz, executive director of Taxpayers United of American (TUA).

“Taxpayers tragically trust the tax-raisers when they are told that paying more for salaries and benefits will result in higher quality ‘educators’ and administrators and better outcomes for their students. They certainly don’t expect so much scandal for their money.”

LPHS Coach Jared Wissmiller was convicted for his sexual relationship with a 15 year old student. Years later, LPHS volunteer coach Frank Battaglia was found to be a convicted sexual offender. Battaglia’s background was covered up by principal Dominic Manola, athletic director Pete Schauer and coach Chris Roll. This all came to light during an investigation into athletic recruiting violations.

“The Teachers Retirement System (TRS) is only about 50% funded. Guess who is on the hook for the other 50%? Taxpayers can’t afford to overpay teachers in employment and then another 30 years in pensions. But apparently Gov. J. B. Pritzker didn’t get that memo. He is working very hard, even putting in his own money, to get a graduated income-tax amendment passed.”

“Pritzker’s graduated income-tax will decimate middle-class Illinoisans. It’s never a good idea to raise taxes, but in the midst of the Covid-19 economic downturn it’s just plain crazy.”
“Here is a closer look at what Pritzker’s income-tax increase is really about: Government Pensions. Regardless of how they perform in their government jobs that come with nearly iron-clad job security, as you can see from the LPHS examples, these government teachers can retire early and collect obscene amounts of money from taxpayers.”

“Edward J. Wardzala was only 55 when he retired from Lake Park CHSD 108. With 30 years of compounded COLAs, Wardzala will collect at least $5,928,305 in taxpayer funded pension payments. His current annual pension is a very generous $179,996!     Click Here to view top Roselle government teacher pensions.

“It’s bad enough that government teachers are overpaid, regardless of performance, while they are teaching. It is tragic that we continue to pay them excessively throughout their retirement,” concluded Schultz. 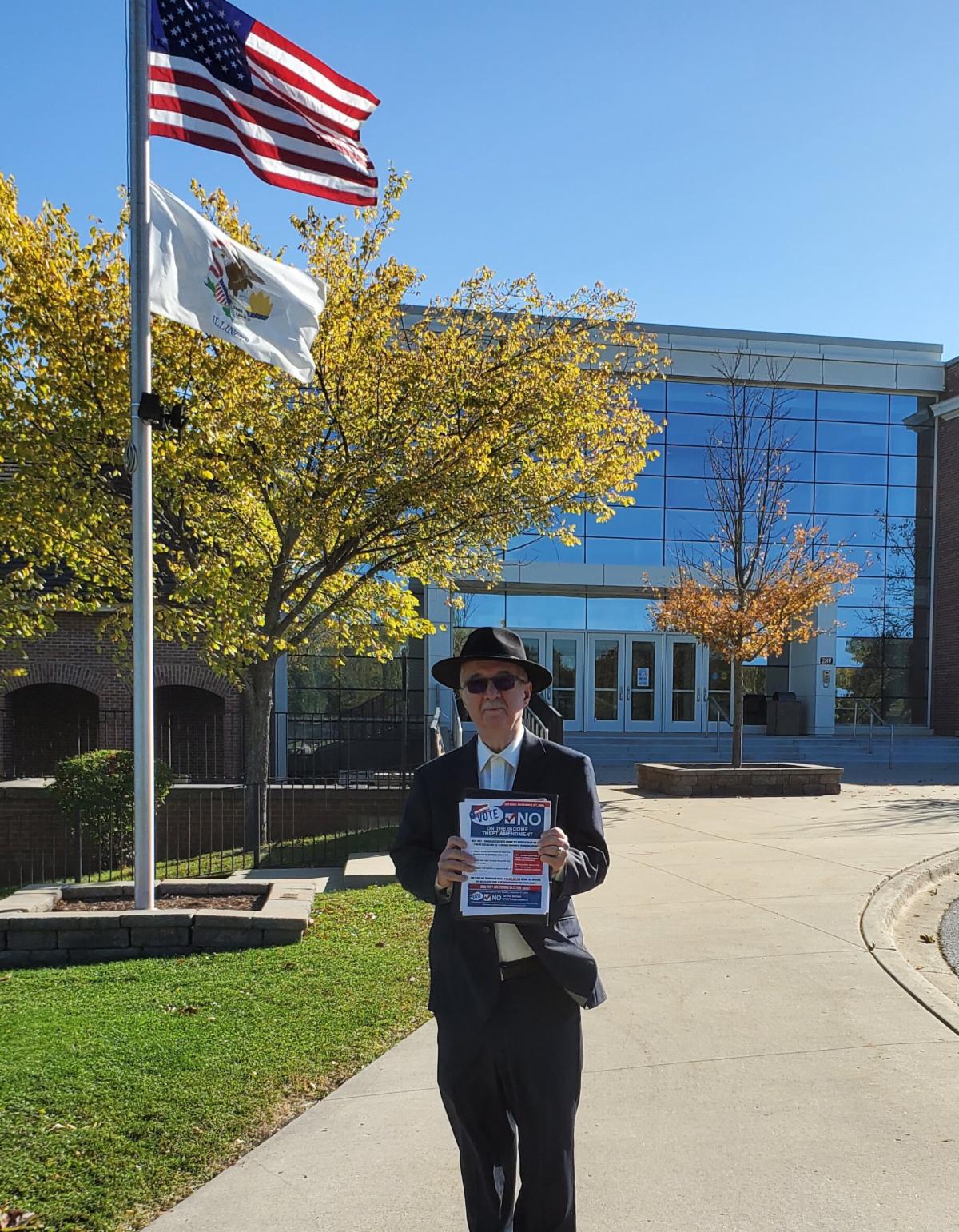 Lake Forest, IL – Government pensions are too rich even for taxpayers in Lake Forest, according to Jim Tobin, economist and president of Taxpayers United of America (TUA).

“Greedy tax-raisers believe that there is no limit to the taxes that residents of Lake Forest can pay,” said Tobin. “They have been hit with a 100% sales tax increase, a 2.5% increase in the water tax, and a 4.64% increase in property taxes. And if Democrat Gov. Jay Robert “J. B.” Pritzker gets his way, they will also take a huge hit in their state income-tax.”

“The Teachers’ Retirement System (TRS) is one of the most bloated pension systems in the state. Even if one is accused of sexual misconduct with students, Illinois will make sure the accused will get a multi-million-dollar pension payout: David Miller who’s been so accused, has already collected $2,080,863 in pension payments and is on track to collect $3,826.299 over a normal lifetime.”

“All of the top 200 TRS pensions in Lake Forest have nearly one million-dollar payouts as well as all being higher than $50,000 a year. On average, teachers only work about 27 years before they are eligible to retire and collect full pensions. The average age of an Illinois teacher at retirement is only 59.

“The TRS is only about 50% funded, and this is what the proposed Pritzker income-theft amendment is all about. Pritzker has placed an amendment on the November 3 ballot to change the state flat-rate income tax to a graduated income tax. If passed, this graduated tax will decimate the state’s middle-class.”

“Between the mass exodus of Illinois residents to more tax-friendly states and the huge loss of jobs and income from Pritzker’s lockdown, Illinois’ middle-class will virtually disappear. Lake County has lost more than 7,600 residents.”

“Here a just a few of the bloated government pensions in Lake County: Harry D. Griffith, Lake Forest SD 67 retiree, has a current annual pension of $288,432. He will collect about $7,795,797 in estimated lifetime pension payments.

Girard Weber retired from the College of Lake County and currently collects $313,394 a year from the State University Retirement System (SURS). His estimated lifetime payout is $6,866,183. He had to invest only $314,282 of his own money for that payout.

“Illinois government employees work only 20.1 years on average in order to collect these lavish, gold-plated pensions. And for every dollar they deposit in their own pension fund, taxpayers are forced to fork over $4.74. Add to that a 3% COLA, compounded for all but IMRF, and it doesn’t take a genius to understand why Illinois’ government pensions are insolvent.”

“Rather than put an income theft amendment on the ballot, Pritzker should have pushed for a pension reform amendment,” said Tobin.

Retired Illinois politicians have become pension millionaires and are getting richer by the day, while Illinois taxpayers lose their jobs, get behind on their mortgages and have trouble paying their bills, according to the most recent study of state pensions by the Taxpayer Education Foundation (TEF).

“These bloodsuckers that raised state taxes billions of dollars, and then retired, are getting lavish, gold-plated pensions and benefits,” said James L. Tobin, economist and TEF president. “Their functionally-bankrupt state pension plan, the General Assembly Retirement System (GARS), like the other state pension plans, has been kept on life-support with billion-dollar increases in the state income tax.”

“Thanks to the tax increases that many of these reprobates voted for, the state is economically dying and has lost population six years in a row.”

A central figure responsible for much of the pension crisis is former governor James R. Thompson (R), one of the worst tax-raisers in Illinois history. Thompson currently receives an annual pension of $165,987. He has received a total pension to date of $3,219,842. His estimated lifetime pension payout is $3,385,829.

Edgar signed into law Senate Bill 3 in 1998, the biggest government pension increase in the history of Illinois. SB3 gave retired government teachers 75% of their salary at retirement, with annual compounded increases of 3 percent. SB3 will cost taxpayers $4.5 billion in 2020, which is 12% of the Illinois state budget!

The taxes to support these outrageous Illinois government pensions are driving taxpayers out of Illinois. Almost all of the last $5 billion-dollar state income tax increase was used to prop up the state pension funds. This is why Illinois governor Jay Robert “J. B.” Pritzker (D) wants to pass his Nov. 3. 2020 Income Theft Amendment, a massive state income tax increase for Illinois taxpayers. Instead of seeking pension reform, Pritzker wants another massive income tax hike.

Pritzker is destroying the Illinois economy. He wants to place more taxes on the backs of the state’s taxpayers, while he stubbornly enforces the Soviet-style state shutdown. Pritzker should explore significant reforms to the state’s bankrupt pension plans for retired government employees. He wasn’t elected to declare war on the state’s middle class.