View release as a PDF
Chicago – Taxpayers United of America (TUA), today submitted notice to the Illinois Court of Appeals 1st District, of their intent to withdraw their complaints against Oak Park SD 97 and Wilmette SD 39. The complaints had alleged that the two school districts intentionally understated by at least two thirds, the property-tax increase referenda passed by voters on April 5, 2011.
“This case was being bounced back and forth through every jurisdiction by judges at every level. The legal action has drained the resources of taxpayers in these communities. These taxpayers attempted to hold accountable the government bureaucrats who intentionally duped voters into passing these property tax increases,” said Jim Tobin, TUA President.
“The intransigence and deceit of these government-school bureaucrats is mindboggling. They looked taxpayers in the eye, gave them false information on which to base their votes, then fought these same taxpayers in court to hold on to their ill-gotten property tax increases.”
“Our goal in filing these lawsuits was to stop the taxpayer abuse that is perpetrated by bureaucrats who seek only to protect their own lavish salaries and pensions. 80% of this tax increase is being used to pay salaries and benefits of the government school employees. Such tax increases make the teachers and administrators even wealthier, but no benefit of any kind accrues to the students themselves.”
“The judges who rule on these cases have a vested interest in protecting the ‘tax at any cost’ attitude that prevails throughout Illinois. They get generous taxpayer-funded salaries, and when they retire, they receive huge taxpayer-funded pensions.”
(See: https://www.taxpayersunitedofamerica.org/commentary/retired-illinois-judges-raking-in-gluttonous-pensions.)
“Although we are withdrawing our complaint, we have succeeded in exposing the games these government-school bureaucrats are playing on homeowners, and we will continue to work with local taxpayer activists and groups on these issues.”

View release as a PDF
Chicago – Taxpayers United of America (TUA) helped Westmont activists win repeal of Home Rule, the first repeal victory in Illinois in 29 years. Westmont is one of 5 Home Rule referenda defeated yesterday by activists, with the help of TUA.
“Taxpayers are the big winners in Westmont where they successfully ended Home Rule taxing authority. Home Rule communities always have higher taxes and that is the message that resonated with voters yesterday,” stated Jim Tobin, president of TUA.
“Other big winners in yesterday’s election are River Forest, Elkville, Harrisburg, and Kenilworth, where we helped residents defeat new Home Rule referenda.”
“The most important politics are local and the message that voters sent to municipal leaders this year is that they want a say in tax increases and aren’t willing to give government bureaucrats a blank check to pay for empire building.”
“People aren’t being fooled any longer; they know that 80% of Home Rule taxes go to pay salaries and benefits, including gold plated pensions. Voters in these five communities sent a loud and clear message that they want spending cuts without tax increases.”
TUA members have defeated more than 100 Home Rule referenda since 1980. On March 20, 2012, TUA activists had a clean sweep in defeating six out of six Home Rule referenda.

6 Democrats Stand in the Way of Illinois Economic Recovery

View release as a PDF
Chicago – “Six Springfield Democrats, any six Democrats or all Springfield Democrats, need to be fired in order to demote Speaker Madigan to House Minority Leader,” stated Jim Tobin, president of Taxpayers United of America.
“Illinois is desperate for real change and it will only be realized by firing Speaker Madigan.”
“I urge everyone to watch our short video that explains why Madigan needs to go. The video is fun, but the situation is dire. Illinois is in desperate straits and Madigan has been calling the shots for 30 years; it’s not hard to connect the dots between bad policy and bad leadership.”
“Share this video with all of your friends; it’s an entertaining way to get the message out to every voter in Illinois.” 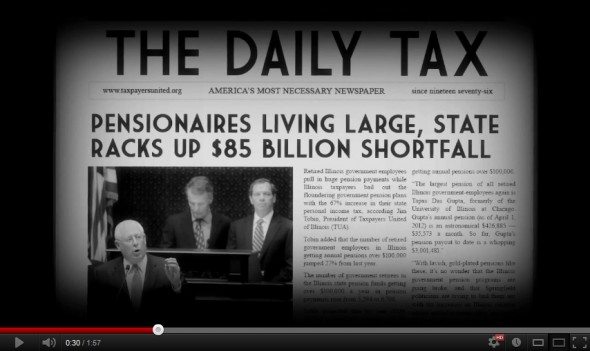 Magnum TI and the Case of Illinois’ Fiscal Crisis can be viewed at: http://bit.ly/madiganvideo