It’s What You Didn’t Say, Governor!

View as PDF
Chicago – Republican Gov. Bruce Rauner delivered his first State of the State address to the Illinois General Assembly Wednesday, beginning his inaugural term as governor by outlining his own approach to a number of critical issues plaguing taxpayers.
Taxpayers United of America’s (TUA) director of operations, Jared Labell, said that today’s speech was a mixed bag of positive steps and setbacks for taxpayers. “We’re glad to hear Gov. Rauner supports government reforms that will reduce the size and cost of government by consolidating offices, leveraging purchasing power and returning some control to local government while reducing the more than 7,000 government taxing authorities.”
Labell was also optimistic about Gov. Rauner’s forthright discussion of the government unions’ power and conflict of interest with the taxpayers. “It’s about time a state’s chief executive connected the dots between the union thugs, campaign contributions, and the ever expanding government employee pensions, an issue on which TUA has been at the forefront for nearly a decade.”
“These lavish, gold-plated government pensions are the most critical financial challenge for Illinois. The taxpayers who have their hard-earned paychecks looted to pay for billions in government largesse are really hurting, being forced to work longer and harder, sacrificing their own retirement savings to fund the government retiree lifestyle.”
“My optimism over the implications of Gov. Rauner’s fiscal policy on taxpayers vanished with his glaring omission of how he would pay for the big spending increases in the education and prison systems. Gov. Rauner has made it known throughout his campaign that he supports broadening the Illinois state sales tax to include numerous services, including advertising, storage, and printing. He wants to, and barely mentioned, ‘broadening the tax base’, but has not mentioned lowering the sales tax rate itself,” said Labell. “I guess we will have to wait for his budget speech to see if the governor’s proposal is really just a massive tax increase for average taxpayers, who would be hardest hit by such an indiscriminate tax hike.”
“Raising taxes in any way before addressing the real budget problem, the unsustainable government pension system, is counterproductive and irresponsible. There are steps that can be taken immediately, such as placing all new government hires in retirement savings accounts and increasing employee and retiree contributions to healthcare premiums,” concluded Labell.

View as PDF
CHICAGO – Yesterday, Taxpayers United of America (TUA) released the results of a new study of more than twelve thousand Chicago Police and Fire Department pensions.
“There are thousands of retired Chicago police and firefighters receiving lavish pension payments, each exceeding the cost of hiring nearly three new employees for either department,” said Jim Tobin, president of TUA.
“Taxpayers are compensating police and firefighters for more years of retirement than years of actual employment; the pension system as currently structured is unsustainable.”
The press conference was covered by three Chicago television stations and Crain’s Chicago Business.
· Click here for yesterday’s CPD and CFD pension news release
· Click here to see the complete list of 9,192 CPD pensions
· Click here to see the complete list of 2, 822 CFD pensions 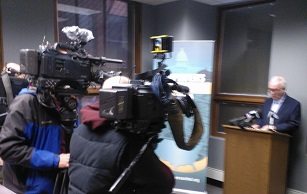 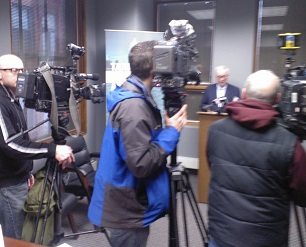 View as PDF
CHICAGO – Chicagoans aren’t getting their money’s worth for their police and fire departments, according to Illinois’s largest taxpayer organization, Taxpayers United of America (TUA).
“Our study of Chicago police and firefighter pensions shows that we are paying through the nose for a system that has failed us at every level,” said Jim Tobin, president of TUA.
“Chicago has some of the highest crime rates and most dangerous neighborhoods in the country, despite higher than average pay and benefits for its police officers. Being the second largest law enforcement agency in the United States, with some of the worst outcomes, it is a failure of epic proportions.”
“What are we getting for billions in unfunded pension liabilities? We are getting absolutely nothing but a huge property tax bill that pays for services rendered yesterday and leaves nothing for the services we need today.”
“We are paying cops and firefighters for more years of retirement than years of actual employment. This makes solvency of the pension system a mathematical impossibility.”
“These lavish pensions range as high as $150,000 annually, with an average police and firefighter retirement age of 57. The top 1,000 pensioners for the Chicago Police Department are collecting nearly $88 million from taxpayers annually and the top 1,000 Chicago Fire Department pensioners are collecting nearly $90 million from taxpayers annually. Reviewing this sampling of data underscores the unsustainability of these pension systems, and this economic crisis only gets worse as you factor in the entirety of our study of roughly 12,000 Chicago Police and Fire Department pensions.”
“There are thousands of retired Chicago cops getting more in pension payments than currently employed cops. It’s no mystery why the system is bust when you are paying people like retired CPD employee, Philip Cline, $158,932 per year to do absolutely nothing. This one pensioner makes more than three new hires.”
“Retired firefighter, James T. Joyce paid into his pension fund barely more than one year’s worth of pension benefits. His current annual pension payment of $151,814 could pay nearly three new hires for the fire department.”
· Click here to see the complete list of 9,192 CPD pensions
· Click here to see the complete list of 2, 822 CFD pensions
“The governments of Chicago and Illinois have failed us. Rank and file members would rally behind pension reform if their union bosses were honest with them about the bleak future of their pensions. It is in everyone’s best interest to solve the pension problem before the system completely collapses. It is no longer a matter of ‘if’ it will collapse, but when.”
“The solution is straightforward: Chicago must immediately place all new police and fire department hires into 401(k) style retirement savings accounts, increase member contributions to the fund, increase retirement age for full benefits, and increase member contributions to 50% of health care premiums. Anything short of these reforms will do nothing to permanently solve the problem plaguing the financial health of the city of Chicago and its taxpayers.”